Marian Morash says this is a "perfectly simple, humble soup is wonderful for supper on a cold, wet day". I got the recipe from page 158 of the Victory Garden Cookbook, but substituted celeriac for celery and plain yogurt for heavy cream. It was absolutely fantastic! 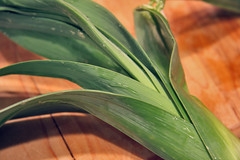 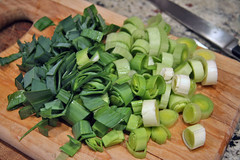 Gretta pulled this leek from her field last week. (The potatoes, onion and celeriac are from her CSA share.) I'm thinking of growing leeks next year, so I looked up some information. Leeks are another vegetable that do well very late into the cold weather. Along with kale, they are the most cold-tolerant of vegetables.

Different varieties of leeks are better adapted to cold weather. There are two basic types of leeks: summer types (long shanked—bulbless) and winter types (short shanked—slight bulbing). As a general rule, leeks with blue-green leaves tend to be more tolerant of the cold. If established in late summer they can overwinter through the frozen ground and snow pack of northern New England. In fact, the colder the temperature, the sweeter the taste. On the other end of the spectrum, they will endure, but are not particularly fond of temperatures consistently above 85˚F. 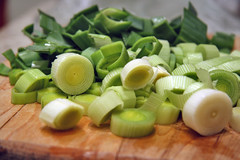 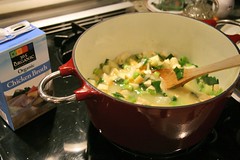 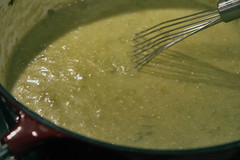 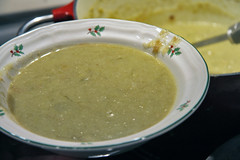 My version of the recipe:

Bookmark entered! Thanks for all the good info on leeks and weather tolerance. Your pictures look so professional :-) Does this soup freeze well, do you think?

Marion Morash says this soup does indeed freeze well. She recommends to leave out the yogurt/cream, freeze, then add it when you serve the soup.

Hi!
I hope you will have a ....
MERRY CHRISTMAS!
Linda

That looks TRULY wonderful! I love making soups this time of year. I know one very similar called Swiss chalet soup. The same ingredients as yours but you toss in small lumps of gruyere cheese and croutons! Enjoy!