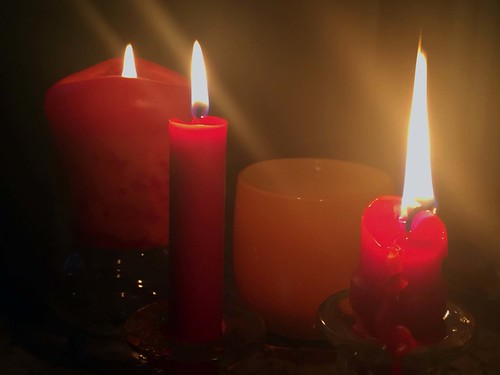 I lit these lights in the darkness tonight
In another season, we would still have sunlight
We would have warm air and full gardens
But now it's the New Year and lights sparkle in the cold and darkness,
It's time to reflect and plan for new things.

I very much hope 2016 is a year of peace in the world
I wish 2016 would bring food and happiness for everyone.

For me - I'm beginning to plan my gardens
I have a nice stack of catalogs, circles here and there, a growing list of partially made plans
By the warm glow of candlelight,
I'm imagining a bountiful new season.
I hope 2016 is bountiful for all.

how are you planning your next vegetable garden?

We need a new poll!

I just got the MOFGA (Maine Organic Farmers and Gardeners Association) Newsletter and their top item today is about garden planning software. They site this link for 10 Best Vegetable Garden Software of 2016. Except when you get to the link, it says it was last updated in 2011. Five years ago!!

I wrote to MOFGA, Jean wrote back immediately! and we agree, we need a new review of Planning Software. So, how do you do your garden planning?

Me: I like to use paper and tracing paper. I trace last year's garden, then move around my crop locations. I erase and rewrite. And think about it. Then I make my final draft. Which is never final, because I'll think of something to change. Software is fun to use. Sometimes I use PowerPoint, only because it's on my computer for my business. I can make lots of edits with this. But I like my hand drawings better.

So, two questions, First: Do you use Garden Planning Software? Please use this poll

Do you use Garden Planning Software?


Second: Have you tried any Garden Planning Software recently? Please leave me a comment and let me know. Maybe Mother Earth News and Grow Veg? I'll put together another poll soon to see what software the readers of this blog like to use.

There wasn't room for our tree inside this year, because of renovations we are doing, ... so... the tree is out on the patio decorated with lights and bird food. 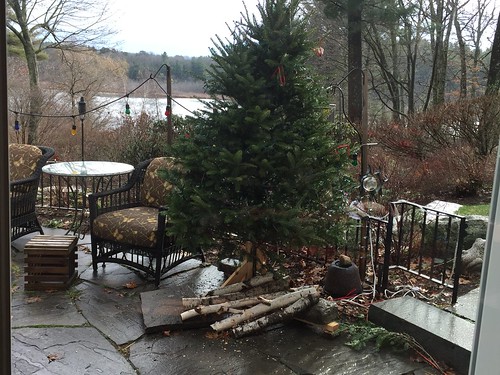 Who came to the tree? First a couple of noisy red squirrels! Then, Suzie (my little Portuguese water dog who loves birds food), my chickens, and then lots of birds. A Carolina wren, junco's, ground sparrows, chickadees, and cardinals. 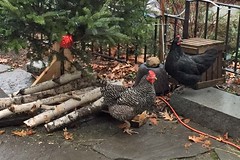 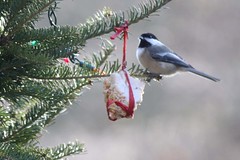 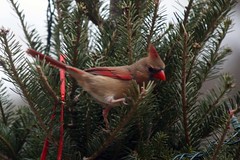 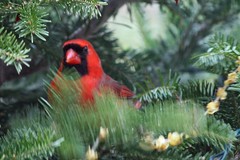 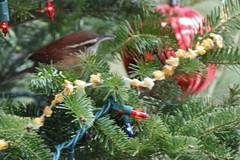 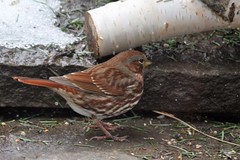 Oh, and Santa came by too. On Christmas morning there was a big pile of new garden tools!! I can't wait to use them all. Email ThisBlogThis!Share to TwitterShare to FacebookShare to Pinterest
Labels: birds

Daphne brought up biochar as the most stable way to sequester unwanted atmospheric carbon. As a nice side effect, it also improves the soil. And Tony explained that my tasty lettuce gardens don't hold onto much carbon very long, but if I added more wetlands, that would. Hmm, carbon gardening - that's new to me. I had to do more research.

The main focus of recent Climate Change Conferences is to reduce emissions, but then, there's a secondary discussion: what to do with the carbon that's already in the air? Biochar is one proposal.

Solutions for the "What to do with it" problem have been divided into biological and chemical approaches. NOFA recommends tying CO2 up in plant/compost cycles. This has the advantage of using a free energy source: the sun. The disadvantage is that we have only the earth's surface for this activity.

Biochar (pyrolyzed organic products that sequester CO2) production is also considered a "biological approach". (I'm not sure why as it doesn't use the sun to do the pyrolyzing, it uses fossil fuel. It just make use of organic products.) Biochar has the advantage of great potential capacity as it can be buried, However, the scale it's used on currently is relatively minuscule.

There are also spectacularly varied chemical methods of capturing CO2 that are being proposed — "from direct air capture using resins, to the use of crushed olivine (a mineral that absorbs CO2 as it weathers) to seed beaches, to new forms of carbon-negative cement-making."

But back to the biochar, it's currently having an impact agriculturally as a soil amendment that revitalizes tired soils. It's not effective everywhere (negative issues include price, affects on soil microbes, and the large volumes that are needed), but in many places it is improving crop production. Like Daphne's garden! (Is that how she grew those beautiful sweet potatoes?)

As far as expanding biochar production to the point where it can impact atmospheric CO2, critics are concerned that land used to grow plant material could displace food crops, they sorry and about socioeconomic effects, and they worry about what eventually happens to biochar in soils - when it does breakdown. They worry that sufficient research has not yet been done.

I like the rational view of Stephen Joseph, a biochar researcher from Univ of New South Wales in Australia, "Biochar probably won’t save the world from climate change, nor is it going to be the key to increasing agricultural productivity everywhere. But used wisely, it is a tool that may help in both situations.”

Personally, I this I'll to stick with NOFA's very biological approach and traditional methods: Cover everything I can with plants (more lettuce!! more clover!!), compost everything I can on site, and use my chickens to enhance my composting. I'm also growing locally - in my backyard - and reduce driving to the grocery store. I hope my little micro-farm is at least a transient a part of reducing atmospheric CO2.

Since I'm a new NOFA member I was reading through their literature. I like this one about Soil Carbon Restoration.

"Much discussion has focused on how to deal with greenhouse gas emissions and resulting weather extremes. Most analysts believe we must stop burning fossil fuels to prevent further increases in atmospheric carbon. [But we} must also find ways to remove carbon already in the air....

"...where can we put carbon once it is removed from the air? There is only one practical approach -- to put it back where it belongs, in the soil.

So here's a list of things vegetable gardeners can do to put carbon back in the soil:
- Plant nitrogen fixing cover crops and living row paths
- Heavily mulch weeds instead of pulling
- Incorporate no-till or shallow till practices
- Replace pesticides and fungicides with diverse beneficial organisms
- Incorporate perennials in our garden
- Compost your garden and kitchen waste
- Recycle biomass with livestock (grazers, browsers, compost to poultry)

I think we've all heard about the importance of doing most of these things since we know good soil health is important for our crops. Soil health is also important for the earth. More info is at the NOFA site (NOFA Carbon Soil Restoration).
Posted by kathy at 12/28/2015 12:24:00 PM 7 comments:

I just signed up for NOFA's winter one-day conference Saturday, Jan 16 in Worcester MA. Anyone else going? Has any been to these before? I just signed up as a new member. It looks fun. NOFA is the Northeast Organic Farming Association. I met a board member the other day and he told me they had lots of programs and resources for organic home gardeners.
Posted by kathy at 12/27/2015 11:57:00 AM No comments: 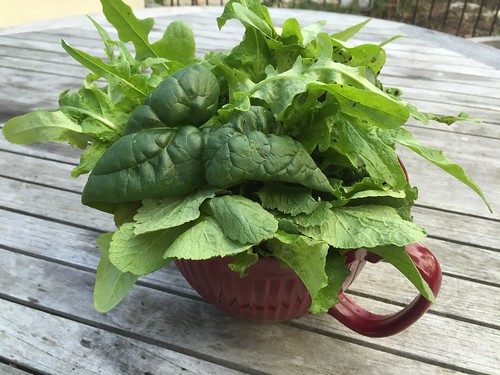 Email ThisBlogThis!Share to TwitterShare to FacebookShare to Pinterest
Labels: harvests 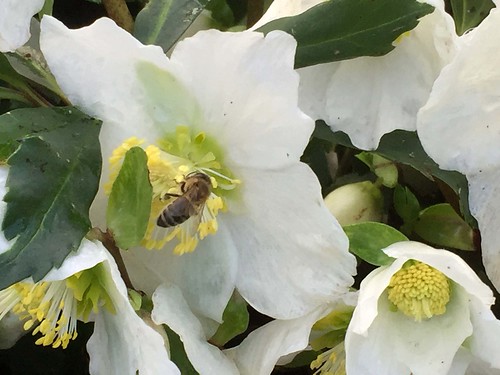 Last week the hellebore has been blooming gloriously in the misty unusually warm New England weather. Today the sun broke out. I saw my bees were out foraging. Hard to believe on the last week of the year! I found some, collecting hellebore nectar (....more)
Posted by kathy at 12/25/2015 08:14:00 PM 1 comment:

Email ThisBlogThis!Share to TwitterShare to FacebookShare to Pinterest
Labels: bees 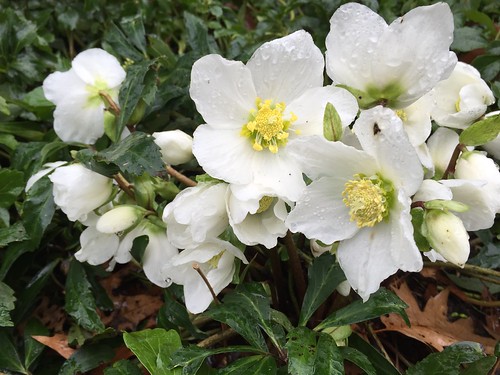 gifts under the tree 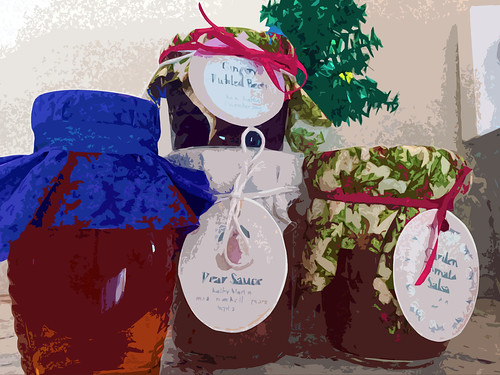 I was hoping it would look like I painted this picture. It's a few jars of garden pickles and some honey decked out with fabric caps. We don't have room for a tree in the house this year, just this little USB one. A very cheery little plastic fir.
Posted by kathy at 12/22/2015 11:40:00 AM No comments:

potting up a sprouted sweet potato 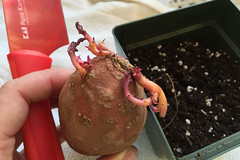 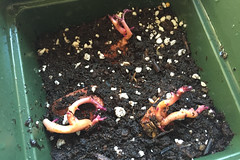 My mom gave me this nice sweet potato. From the super market. I find it really hard to get these to sprout. I love to grab one that is sprouted. I put it in a pot. It'll go on the kitchen window sill. They grow slow, then fast.

I've heard of gardeners who start their own sweets having the kitchen window covered with vines by planting season. Well, that would be fun. Last year I bought 12 slips and they weren't cheap (though I forget how much they were - $25 maybe). Maybe some of mine will sprout, at least they weren't treated with sprout inhibitor like the supermarket ones are. I'll watch them.
Posted by kathy at 12/20/2015 11:09:00 AM 4 comments: 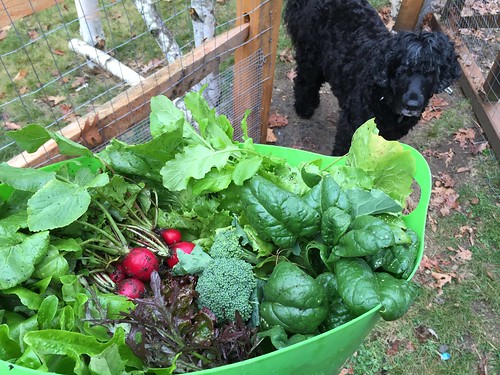 Email ThisBlogThis!Share to TwitterShare to FacebookShare to Pinterest
Labels: harvests

We could really use some reviews of our seed planting app. For any one who used it last year, could you give it a brief review? Here's the preview link: https://itunes.apple.com/us/app/skippys-garden-spring-planting/id970091991?mt=8. Click "Open in iTunes" and then click "Reviews". Thanks!

Here are reviews a few gardeners left for us last year, but they didn't post them to the Apple Store.

"Thanks for the nifty app! " - MIchaeldg
"Love the simplicity... Very easy to use... very useful" - Mayhew
"It is a wonderful app....I will be able to carry it with me to the garden without printing out my garden plan. I especially love the transplanting calendar because most books and seed packet instructions do not tell you when to transplant. - Nancy

Email ThisBlogThis!Share to TwitterShare to FacebookShare to Pinterest
Labels: calendar app, make your own planting calendar

inside my winter tunnel 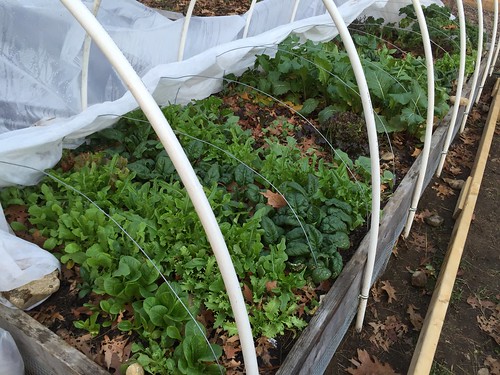 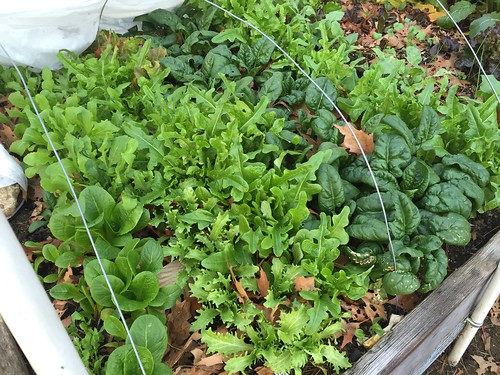 Plants in my tunnel are from my winter seed sowing calendar, which is part of Skippy's full-season planting calendar app. I planted everything to test the planting dates in the app.

The app is $1.99 (iOS or Android). I think the price will go up for the next season (probably to $2.99), so it makes sense to get it now. All pf the app updates will apply whether your buy before or after the price increase. The calendar has spring and fall planting schedules too.

I'm counting down the days til my spring planting begins - end of February! 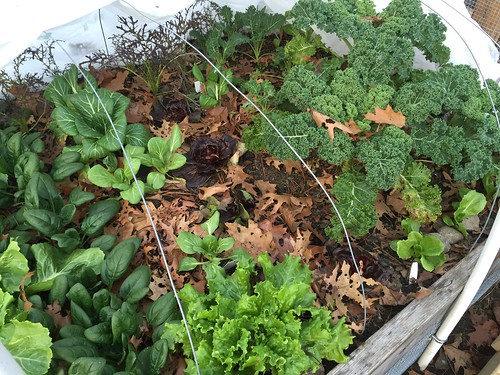 My only complaint with my tunnel is that I wish I had planted more of them! Next year... 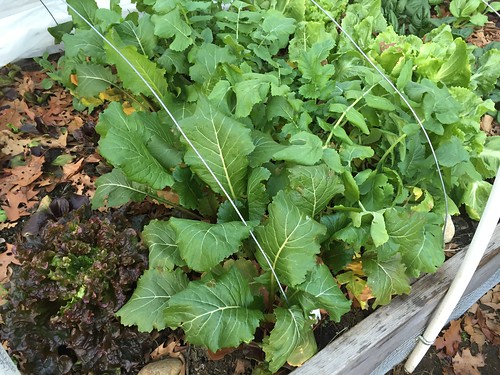