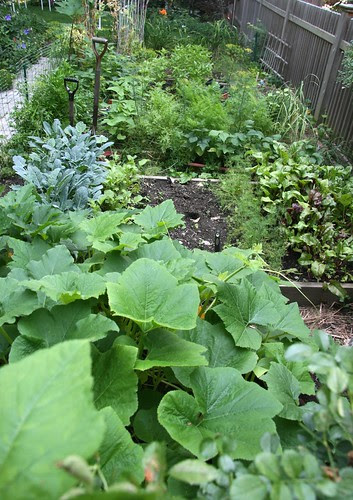 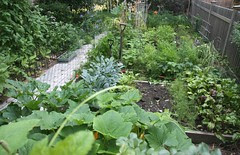 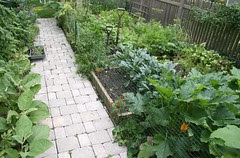 I end up doing most of my garden work on the weekend. This weekend I will pull up the shriveled pea vines (Capucijner and sugar snap peas) and remove the trellises. My lettuce (romaine and a mix with oakleaf and simpson lettuces) is looking very sad (spindly, semi-bolted and buggy) so these will come out too. I'll prepare the soil by digging in a bit of fertilizer. I'll put in a row of green bush beans and save the rest of the space for planting later on this summer. Last week I planted several rows of lettuce (Simpson Elite and four-seasons butterhead) and the previous week, some arugula and escarole (blondie).

Several of my crops need thinning. I'm eating the carrots as I thin them and will keep at this. The beets and chard need thinning too. Also I have a very thick row of kale that I've been ignoring. It looks pretty, but I should thin this too.

I also need to do some work on the tomato vines. They need to be tied to their poles. And the enormous orange dahlia next to them needs to be tied to its poles. (It is starting to get buds.) Both the dahlia and tomatoes are about 7 feet tall now. 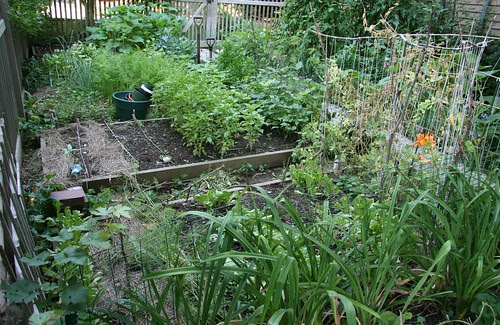 Your garden looks very healthy; lush, green and big! Looks like all the weekend work Skippy supervised paid off.

I'll have to post a photo of Skippy doing his garden "supervising". Napping in the summer sun... what a life.

I hope your garden is growing well and you are enjoying your tomatoes.