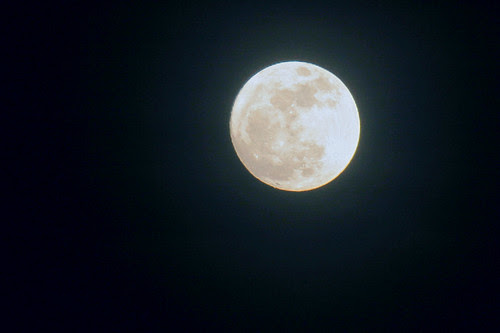 It sure looked 14 percent larger and 30 percent brighter!

The Farmer's Almanac says the March full moon is the

Full Worm Moon – March As the temperature begins to warm and the ground begins to thaw, earthworm casts appear, heralding the return of the robins. The more northern tribes knew this Moon as the Full Crow Moon, when the cawing of crows signaled the end of winter; or the Full Crust Moon, because the snow cover becomes crusted from thawing by day and freezing at night. The Full Sap Moon, marking the time of tapping maple trees, is another variation. To the settlers, it was also known as the Lenten Moon, and was considered to be the last full Moon of winter.

Email ThisBlogThis!Share to TwitterShare to FacebookShare to Pinterest
Labels: moon

I'm totally jealous, it's been raining here, so we haven't been able to see the moon. I'm setting my clock for an hour before moonset to see if I can catch it.

Incredible photo! What kind of camera do you use? I tried to take a picture of it, and it was less that "super". :)

My camera is a Canon EOS Digital Rebel XTi. I photographed it with a zoom lens. Its hard to photograph a small very bright spot in a dark background and get anything other than a white blur. I used manual mode, though I don't know much about how to adjust the settings, so I just flipped through a few exposures. Then I did what I could, with post photo software. I use Photoshop extensively for this shot to adjust the shadow/highlights ratio and enhance the blue/green in the thin clouds around the moon.

The photo does not replicate very well the way the moon actually looked. The glow in the clouds was much brighter, a filmy blue. And the moon had more craters and mountains visible even to my eye.

I found a nice web site by googling just now "photograph the moon". With a tripod and more knowledge of camera manual settings, they get amazing photos.

What a spectacular photo! I saw it when the moon first rose (it was very red and giant) but didn't go back outside to see it that night. Thanks for sharing!

Thanks for sharing this lovely photo! It may not replicate the exact look, but it gives a very good idea to all those who could not see the moon that night. Thank you!

It really did look so much brighter! Great photo.