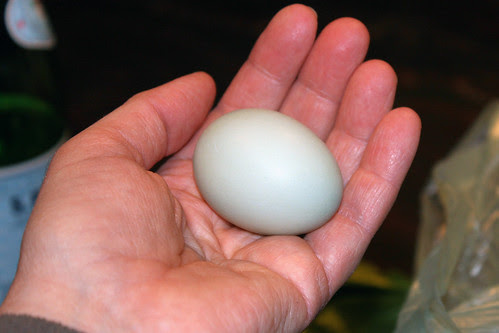 An egg, an egg!!! I am so excited! My chickens have laid their first egg.

I was busy all day today and, for the first time, didn't get out to the coop until very late. It was about 7 pm and dark, but the coop light was still on. The hens muttered as I came up, something about "where have you been" and "why didn't you bring us our leftovers this morning" or maybe it was more like "we're really glad to see you".

Anyway, they clucked and baaked and I did the usual check of the coop and THERE IT WAS! I've looked for an egg at least once a day since the end of November. I hardly knew what I was seeing.

Its a pale blueish-greenish egg - that would be one of Ginger's. She's an Araucana chicken. My brown hen. (My other two hens will eventually lay brown eggs.) Its a lot smaller than the extra-large store-bought eggs I had in the fridge.

I found the egg lying in the middle of the hen house, almost buried in the extra deep layer of fresh wood shavings and hay I put down a couple days ago. I'll have to tell Ginger she's supposed to lay in one of the nesting boxes. That's OK, I can work on explaining that to her now that she's an official "laying hen"!

Congrats! I've been watching for this. How exciting.

Hooray! My Ameraucana (Petunia) just laid her first green egg today, too! My girls are 24 weeks old today and only three of the five are laying. I'm astonished I'm getting eggs in January, though.

Wahoo!! Congratulations. Guess I need to come back east for breakfast.

Congrats! I keep wishing someone in my neighborhood would want chickens and trade the extra eggs for veggies.

Congrats on your first egg! My Arucana/Easter Egger was the first to lay also.

Rocking! She was most likely not familiar with the experience. You soon. First Harvest!

The first couple eggs from each hen will probably end up in strange places. I think it takes them a couple tries before they realize what's happening to them. If you haven't already, try putting a golf ball or plastic east egg in each nest box.

Congratulations on your first egg! It seems like such a long time between day old chicks to point of lay. Enjoy your breakfast :)

I'm a chicken onlooker, but I think the eggs from young hens are small.

How exciting! I can't wait to get my chickens. I will have to live vicariously through yours for now.

I get a kick out of nBoer saying the chickens were likely not familiar with the experience of laying their first egg. then Gren Zebra explains it will take a few tries til they realize what's going on. I feel the same way! It's really amazing.

Congratulations on your first egg!!

chickens' eggs will get larger... the first few are the 'test' eggs and are smaller.