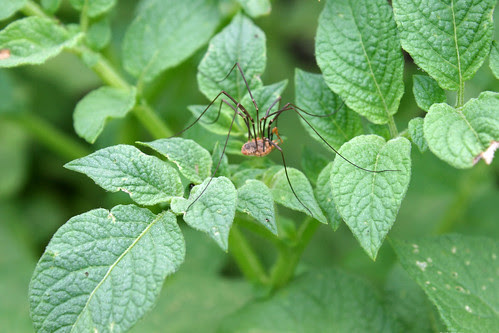 I love to see these amazing creatures. This Daddy Long Legs is on my potatoes. Maybe that's why the Potato beetles aren't proliferating as fast as they sometimes do.

I had to look up some info on these spiders-that-aren't-spiders.

They're not spiders, they're Opiliones. And they're more accurately called harvestmen.

Harvestmen legs can exceed 6 inches! They molt every ten days and their legs have seven joints. The embryos also apparently have one or two "egg teeth" to help them get out of the egg sac. They really are good guys in the garden:

Harvestmen are garden predators and scavengers and eat a wide variety of food, preferring insects and other arthropods (dead or alive), though also eating vegetable matter and juices. Adults usually begin foraging at twilight. Food ranges from aphids, beetles, caterpillars, earthworms, flies, mites, small slugs, snails and spiders, to fecal matter and fungi. After each meal a Harvestmen cleans each leg, drawing them, one at a time through its jaws.
Posted by kathy at 6/30/2013 10:19:00 AM

I just got bit on the forhead while working in the garden. It was from a spider and I required 10 days of antibiotic. I do not care for Spiders... but I have to say that the Daddy long legs are a type that I do like to see in my garden as well. I have been seeing small holes in my once in tact potato plants. I assume that they are from those beetles that you were talking about? This is my first time growing potatoes.. Is there anything that I can do naturally to get rid of them?

Good info! Thanks for posting this bit of info. Hopefully some find the Mexican Bean Beetles enjoying my Scarlet Runner and Green beans.

Yes they are. Of course I have one son (the 4 year old) who wants to constantly step on them, and my other son (6 years old) that won't go near them ... but they are such tremendous little workers .. the spiders that is ... not to diminish the great work that my sons do :)

I'll definitely leave these guys alone in the garden. I'll even relocate a few to the garden if I happen upon them :-).

One reason to plant your potatoes early is so they are good sized before the flea beetles show up. I find that they poke a bunch of holes in late spring, but don't affect the potatoes. Here's a great fact sheet with some more info on how to avoid flea beetle damage.

Hi well I never. We have a lot of these roaming about at the Lottie. Really interesting Kathy I thought they were spiders. Amazing creature.
Thanks for the info. It's marvelous that there is always a new thing to learn pretty much every day! I recently started to make jam, it's not so complicated as I thought although you need a spare hour or two which I don't reasonable have! I am hooked, it has become a late night activity and I am running out of people to give it to!
Marian (LondonUK)

Marian, Jam sounds yummy. I have a ton of pears on my trees that are sizing up really well. I wonder if I can make pear jam? What kind of jam are you making? I wish I was closer so I could help you out by being someone to give it to!